New Payment System Operator never fails to disappoint in terms of its governance and processes. Three Victor Meldrew moments in one week – that is a new record.

Firstly we have an announcement that Louise Beaumont, a member of NPSO’s End User Advisory Council (“EUAC”), has taken on a role as Industry Advisor at the large Fintech Bottomline, a stonewall conflict-of-interest. Bottomline ranks as a Participant in NPSO’s taxonomy of the UK payments landscape, and for representing Participants there is the Participant Advisory Council (“PAC”), and the two councils are separate.

One has been assured that NPSO’s processes and procedures have been followed to the letter, which adds to the problem rather than resolving it.

If NPSO’s processes and procedures do not prevent this kind of conflict of interest, there is no point in having them.

A Participant’s Industry Advisor should not be able to sit in the EUAC, and Ms Beaumont should have resigned from it before announcing her new role at Bottomline, only she hasn’t.

As it is, Ms Beaumont will have to recuse herself from every point on the EUAC agenda in which Bottomline has an interest. Otherwise it will be uncertain whether any point she makes is Bottomline’s point, or a point raised by end users of Open Banking, the constituency she is supposed to be representing in the EUAC. Since Bottomline are involved with Open Banking, she would not be able to comment on the very subject that she has been elected to the EUAC to advise about. Game over, surely, but not at NPSO, where black is the new white.

This type of non-sequitur is par for the course, as can be witnessed again from the low quality of NPSO’s Board proceedings. The only challenge is how low you can go and judging from para 143 in the same minutes on Open Banking it is very low indeed. We have an explanation there of the scope of the Competition & Markets Authority Order: “CMA work broadly covers personal and business current accounts and the below elements:

Oh dear. Surely that should be “Read-Write API”.

We are on a level here with missing accents in ‘O’ Level French (e.g. when “to reply” is written as “repondre”, meaning “to lay another egg”).

What this howler indicates is that whoever took the minutes has no idea about the substance (which may be acceptable but is not ideal), but it is not acceptable for the Board to agree the minutes in this form at their subsequent get-together on 8th August: they either did not read them properly or did not know enough about Open Banking to pick out this schoolperson error.

If all that wasn’t enough we have the announcement of five more advisory groups at NPSO to help them on New Payments Architecture (“NPA”), and this is just the first instalment. They are on NPA participants, procurement, legal, the Request to Pay service and transactional data analytics. NPSO announces that yet “more advisory groups will be set up as required, with plans already in place to start recruitment for technical, enhanced data, security and resilience groups over coming months, so they can be set up in early 2019”. That would be 9 advisory groups to help shape NPA, on top of the EUAC and the PAC. 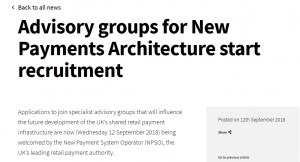 Is it just me, or wasn’t the NPA Blueprint that was handed over from the Payment Strategy Forum to NPSO at their rah-rah event on 8th December 2017 billed as an implementable plan?

It certainly should have been, given that it emanated from two and a quarter years of elapsed time, dozens of roundtables, meetings, papers, at least 2 consultations and so on. The extent of the work still needed on it implies otherwise.

Even these delays leave a hiatus, because we won’t be seeing NPA much this side of 2025, judging from where the project stands now and from past experience with SEPA (the main implementation of ISO20022 XML). SEPA’s coordinating body – the European Payments Council – was established in 2004, the first SEPA product went live in 2008, and the migration was completed in 2016 – with the force of SEPA Migration End Date Regulation behind it. There were migration projects at the levels of the Clearing & Settlement systems, at the PSPs and at major business and public authority users.

NPSO is one year in and is putting in place an even more elephantine project structure. If NPSO can work to the same timescale as EPC, we could expect to see the infrastructure level established with basic products available on it between major banks in 2021, after which the remaining PSPs can be brought on, after which the end users can be migrated. That takes us to 2025 in the best case and NPA can then be said to exist. After that, new “overlay services” – like Request to Pay – can be contemplated.

The phases could easily take longer, without either the force of law behind them, or a compelling business case for users to adopt ISO20022 XML just to experience a like-for-like service. This latter point about the SEPA services was the main trigger for the passing of the SEPA Migration End Date Regulation. Remember “no compulsion, no prohibition”? That went out of the window when users did not do as they were asked. NPSO should start lobbying government now to pass a New Payments Architecture Enabling Act, with ferocious penalties for non-adherence, like immediate withdrawal of chocolate rations.

Otherwise we might as well re-brand NPA as HS/3.