Loss of Hain Marbles an affront to freedom-loving peoples

The nauseating spectacle in the right-wing British media of the loss of the Hain Marbles in the House of Lords will have sickened freedom-loving peoples everywhere. 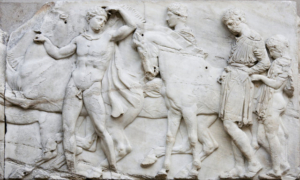 Since being expropriated from its native South Africa in the 1960s by imperialist lackeys masquerading as archaeologists, the Hain has been confined to a series of institutions in the UK, culminating in its incarceration in a museum for ancient fossils called the House of Lords.

The Hain shows worrying signs of interference with mind-bending drugs, a practice commonly used by oppressive regimes against its political opponents. The change from the artefact’s native pigment to an orange glow is testament enough.

Conclusive proof of ill-treatment is to be found in the Hain recent statements that foment suspicion of long-running state-sponsored indoctrination. The Hain was induced to espouse the view that it is right for an unelected member of the nobility to decide what was in the public interest, trumping the operation of the independent judiciary.

This han’t been the case since the 1832 Reform Act, so putting words like that in the Hain’s mouth is implausible, and betokens official manipulation by murky forces.

Such an interference by the executive – and an unaccountable and unelected one at that – into the judiciary would smack of the worst totalitarian regimes, and the script was dressed up in the sanctimonious tones of a Victorian missionary.

Our Hain is too valuable to be left in the hands of these regressive forces.

The time has come for the Hain Marbles to be returned to South Africa where they rightfully belong. This should have happened at the end of apartheid but reactionary forces in the UK impeded it. The Rainbow Nation must rise up as one and reclaim its birthright: the Hain Marbles must be restored!