The “Porto” and “Fino” projects are critical to the “recapitalisation” plan for Unicredit S.p.A.. They are the main destination of the €13.0 billion of new share capital raised via a rights issue in February/March 2017.

This bolstering of “Share Capital” was pre-dated by a write-down of the Unicredit S.p.A’s Reserves from €10.3 billion in its 31/12/15 accounts to (€2.5 billion) in its 31/12/16 accounts – if having negative Reserves is not a non-sequitur. The entire 2016 Operating Profit was also used up in various provisions.

The commensurate write-down of assets reduced the “carrying value” of Non-Performing Loans (“NPLs”).

€4.5 billion was applied to the “Porto” project and in Q4 2016 – to reduce the “carrying value” in the bank’s accounts of the portfolio that Unicredit proposed to retain: the average “carrying value” as at 31/12/16 had come down to 43.43% of the nominal value of those NPLs.

The “Fino” project was subtitled by Unicredit management as “Failure Not An Option”, and the rights issue prospectus represented that institutions had already been lined up to provide the necessary funding to the special purpose company that would buy the portfolio of NPLs, in line with the established structure for “recapitalising” Italian banks.

The transaction has, however, not been fully and finally completed.

According to a story on Bloombergs on 30/10/17, Unicredit has sold the portfolio into a special purpose company for 13% of its nominal value: so far, so good. However all of the financing tranches to be issued by the special purpose company do not appear to have been issued, purchased and paid in, and especially the tranche that will be covered by a guarantee from the Republic of  Italy. This is the key to the whole transaction because normally the bank selling the portfolio receives this tranche in consideration for the sale.

In other words Unicredit sells the “Fino” portfolio for 12.96% of nominal and receives in exchange a tranche of Floating Rate Notes to the same value, the cashflows on which are guaranteed by The Republic of Italy.

The bank can then:

Indeed, once the tranche is on the eligible collateral list, no Eurozone National Central Bank can refuse to lend to Unicredit against it, and at the face value less the haircut.

At any rate Unicredit could for sure move the asset up from line 70 “Loans and receivables with customers” to line 20 “Financial assets held for trading”, improving both the appearance of its balance sheet and its liquidity ratios: the Floating Rate Notes would be listed and tradeable, and count as “High-Quality Liquid Assets” for the purposes of both Basel III Liquidity Coverage Ratio and Net Stable Funding Ratio.

Bloombergs further reported that the European Central Bank is currently examining the transaction, on the point of whether “the already low price at which the loans were sold…was inflated by fees the bank is paying to the buyers to manage the loans. If Unicredit is forced to strip out those fees and re-price the deal, more losses could follow”.

What this infers is that the institutions, whom Unicredit had lined up to buy into the financing tranches to be issued by the special purpose company, did not value the portfolio at 13% of nominal but lower. In order to bridge the gap – and let’s posit that it was 2% – Unicredit appears to have been willing to pay a sort of inducement fee of 2% separately, to induce the special purpose company to pay 13%, such that Unicredit would then receive Floating Rate Notes in consideration in the same amount – which it could then borrow against i.e. it could borrow more than the portfolio was valued at by the institutions. 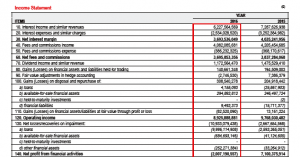 Remember that Unicredit wrote down the “Fino” portfolio to 12.96% of nominal value in Q4 2016 and, although on page 130 of the rights issue it warned that further write-downs could not be excluded, it would be embarrassing for Unicredit to take a further write-down on “Fino” through the same line in its accounts – line 130 – that it took such major provisions in Q4 2016.

That exercise was supposed to be a definitive clean-up.

Any shortfall in the sale price below 12.96% of nominal would have had to be taken as a further write-down through the P&L account in line 130. An inducement fee, however, could be put through under line 50: “Fino” would thus be completed without further write-downs in line 130, and the 2% fee on €17.0 billion – despite being €340 million and a doubling of line 50 year-on-year – would get lost in the figure in line 60 for “Net fees and commissions” of over €3 billion.

The key question is whether this legerdemain around the presentation of the sale price results in Floating Rate Notes that are overvalued compared to the portfolio of NPLs backing them, and thus whether the Floating Rate Notes should be accepted as eligible collateral onto the ECB list. If they are not, it undermines the point of the transaction for Unicredit. If they are, any Eurozone National Central Bank could end up lending on the “Fino” NPLs a larger figure than the underlying security – which is at odds with the legislation establishing the European System of Central Banks.