Unicredit held a “Capital Markets Day” in London today and we have added the full deck to download here. 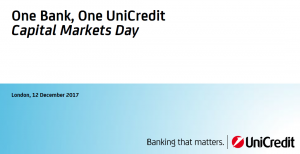 The key slide is number 14, where it discusses Non-Performing Loans.

The main reason for the one-off charges was to write down Non-Performing Loans in connection with the so-called FINO and PORTO projects, and the results of those exercises were clear to see in the annual report as at 31/12/16: the figures for Non-Performing Loans were far lower than the ones shown in today’s slidedeck as at 30/9/16, 30/9/17 and for 2019.

Slide 14 shows the NPLs levels against each of the three recognised categories; we have added the data for 31/12/17 and contrasted that column with the 30/9/17 column:

What is very obvious (if one includes the status as at 31/12/16) is that the position deteriorated sharply between 1/1/17 and 30/9/17, but this is not at all obvious from the data for the dates selected by Unicredit. As an aside they also cannot add up their own columns:

What is really concerning is that, not only has the total of NPLs shot up again by over €6 bn in 2017, but that the category “Bad Exposures” has filled up again after being emptied (supposedly) by the FINO securitisation project.

The portfolio of NPLs subject to FINO was predominantly taken from the pre-existing book of “Bad Exposures”. Had the charges taken in Q4 2016 been genuinely “one-off” as Unicredit claimed in the rights issue prospectus, “Bad Exposures” should have been emptied by FINO, and the value of the residual book of NPLs should then have been accounted for at a “carrying value” commensurate with the amount recoverable. This second element was the PORTO project.

Instead “Bad Exposures” has been first emptied by FINO in Q4 2016 and then filled up again, presumably with loans held as “Unlikely to Pay” at 31/12/16 which have then subsequently had to be downgraded.

Lastly €1.2 bn must have been moved down from “Performing” to “Past Due” to bring that line to its closing figure (of €1.2 bn).

The “one-off charges” taken in Q4 2016 have clearly not been adequate to deal with the NPLs.

This shows one of two things, either:

If a loan is moved straight from “Performing” into “Unlikely to Pay”, it will be moved at its full face value unless a charge is taken through the P&L account to arrive at a lower “carrying value”. If Unicredit does not take a charge against loans that have become impaired since 1/1/17, it will return to its previous position: holding NPLs at a “carrying value” far higher than their recoverable value. That was the exact problem that PORTO was supposed to solve, and as a one-off project.

Unicredit’s Internal Risk-Based Approach model has to come into question, and the rise in NPLs contradicts the essence of the representation in the rights issue prospectus that the charges taken in Q4 2016 for the FINO and PORTO projects were “one-off”.

The slidedeck as a whole is very upbeat and shows Unicredit well on-track with its strategic plan through to the end of 2019. NPLs are made to appear under control, but actually they are still projected to be higher at the end of 2019 than they are now. What is missing is the insertion of the data as at 31/12/16, which shows them to be on a strongly upwards trajectory.