The UK’s New Payment System Operator – March of the Advocrats

New Payments Systems Operator Limited – or NPSO for short – is the operator of the UK’s most important retail payment systems that move more than £6.4 trillion every year, through the Bacs Direct Credit, Direct Debit, Faster Payments, and Paym services. NPSO is a critical national infrastructure.

Disappointing it is, then, that the governance organs of NPSO – specifically its Board and its new End User Advisory Council – have been swamped by the fast-growing “Advocacy Industry”. This is the industry in which individuals either self-style themselves as representing some named grouping in UK society which may not exist as a homogenous unit at all, or are just a generalised good egg with a CV listing many positions at august-sounding bodies where they graze comfortably with fellow advocrats.

An advocrat need not limit themselves to any one field or indeed to one in which they have expertise. In fact the more fields they can get into the better – it’s more advocratic.

The stand-out advocrats at Board level at NPSO are a Mr Peter Wyman and a Ms Anna Bradley.

Peter Wyman has “a current portfolio of appointments in the private, public and third sector”, according to the NPSO website, like some people might have a collection of football programmes. A former PwC accountancy partner from Taunton, he is chair of the Care Quality Commission, although at the time of his appointment in 2015 doubts were raised by the Commons Health Select Committee as to his suitability, and not just because he had no medical experience. The Independent reported on 14th December 2015 that Paula Sherriff, a Select Committee member who had worked within the NHS, passed the comment that: “It looks like the Government have picked a candidate for their experience in wielding the axe, not the scalpel. It also raises the issue of potential conflicts of interest, not just political but financial as well”.

Anna Bradley – originally a studier of drug dependency – rivals Mr Wyman in the range of her advocracy out of her Front Foot consultancy practice just off Peckham Rye. Ms Bradley is current Chair of the Rail Safety and Standards Board, and indeed it is advisable that NPSO have a properly-qualified railway controller on the footplate to ensure that its pet project called New Payments Architecture doesn’t come crashing off its “payment rails”, to use the current parlance. 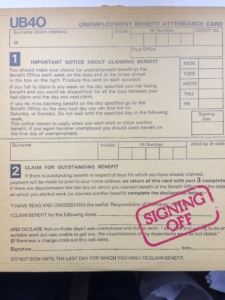 Companies House and LinkedIn show Ms Bradley as having chair, trustee or board seats at Southern Water, Zurich UK Life, Age UK, Healthwatch England, the Care Quality Commission (under Peter Wyman presumably), the Council of Licensed Conveyancers, Soil Association Certification Ltd, the General Optical Council, the OfCom Communications Consumer Panel, and Colchester University Foundation Trust, although no position is listed since 2012 that looks like it would qualify as work for the purpose of the declarations on a UB40 (see inset).

Of course, only fools and horses work, as we know from another of Peckham’s venerable small businesses.

Now NPSO has Richard Anderson as yet another Non-Executive Director: is there anyone there who works? The NPSO announces that “Richard is a past Chairman of the Institute of Risk Management and was a partner at Coopers & Lybrand, subsequently PwC where he led the Strategic Risk Group in Europe, the Middle East and Africa”.

Peter Wyman and Director Anderson, I presume, met one another at PwC (rather than by Lake Tanganyika).

As regards the End User Advisory Council, NPSO issued a press release on 20th March 2018 confirming that “experts from across the consumer, business, government, and not-for-profit sectors have been appointed to the new advisory council that will put the voice of users at the heart of the UK’s payment systems” – experts in something, possibly, but not in payments.

Twelve good advocrats and true will intercede for named groupings of end users: shouldn’t the end users have elected them, then, and not NPSO?

At the top of the list, and Council chair, is your own, your very own……Anna Bradley. Shurely shome mishtake – what about the conflict of interest between this role and being a board member? No worries – in this game the normal rules applying to mere mortals don’t apply.

Jane Vass, like Ms Bradley with a position at Age UK, doubles up in representing The Old.

Terry Jones is Director General of the National Farmers Union so he is the advocate upon earth for The Countryside.

Jo Oxley speaks for The Government, and Gary McEwan for The Start-Up. Scott Johnson, amazingly, is a proper business person and looks like he really can speak for The Small and the Medium Enterprise.

Joanna Wooten – a self-styled “age, disability and inclusion expert” – will be disputing the first mandate with Anna Bradley and Jane Vass, seems to have the second for herself, but has two rivals for the inclusion mandate. The first rival is Sian Williams, a Head of Financial Inclusion, whilst the second is Claire Whyley, whose list of appointments rivals that of Anna Bradley and who purports to stand in for Everyman (aka The Consumer): all people are Consumers, but some are more Consumers than others.

So the Old and the Excluded are over-represented, or under-represented, depending upon whether you think these people really are representatives of anyone apart from themselves.

Ian Wright (Director General, Food and Drink Federation, and point person for The Large Enterprise) is “at the heart of the debate on Brexit, Childhood Obesity and the UK’s Industrial Strategy”. Is he? Is there even such a debate? When is it and where? Is it ticketed? Is it on youtube?

The NPSO Board Minutes of 8th November 2017 pre-determined the Council’s make-up by specifying “5 representatives of the end user community, 5 from the consumer community, and 2 additional payment service users otherwise unrepresented”. Did they order fried rice and prawn crackers as well?

Anyway, NPSO claims to have got what it wanted, and it probably has, but whether this Council truly represents end users of payment services is another question entirely. One could be forgiven for concluding that a key criterion for selection (or invitation or nomination or a nod-and-a-wink or whatever it was) was to know nothing about the subject at all such that the Council members will be able to bring no effective critique of New Payments Architecture in general or of its “Meeting End User Needs” projects in particular, even better if they were involved in the Payment Strategy Forum that begat and sanctified them.