Turkish bank Non-Performing Loans (“NPLs”) will soon be reaching World Class levels, even if the bar has been set very high by the banking systems of Greece and Cyprus: only NPL levels of 40-45% of total loans gets you into this elite club. 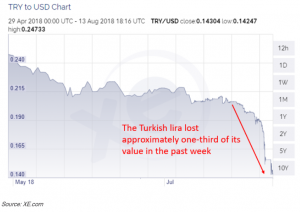 This is where a main result of the decline in the value of the Turkish lira will play out, and we have to be watchful for which foreign creditors and investors are exposed.

There being no offshore money market in Turkish lira, foreign creditors will be exposed via:

Foreign investors in the capital of Turkish entities – which is denominated in lira – firstly have an FX translation risk against their home currency. If the entity is a bank the investor has a second and magnifying risk on the decline in quality of the Turkish bank’s assets caused by the same FX rate change.

Looking at who foreign creditors have lent to, we can be sure that the central government and its large public enterprises will have taken on foreign currency loans and bonds, and have very low matching foreign currency assets and cashflow. These entities are badly exposed to the decline in the lira’s value but at least they represent a sovereign or quasi-sovereign risk.

Turkish banks have issued bonds and taken on loans in foreign currency, in order to on-lend domestically. In theory they have a matching asset for each liability, as long as the borrower can manage the debt service. This is now a major imponderable, regarding the loan book in both foreign currency and Turkish lira.

Private Turkish borrowers operate in quite a controlled environment. There being only a thin market in Turkish lira outside Turkey, credit in Turkish lira is only available from domestic banks and markets. Private Turkish borrowers are restrained from borrowing foreign currency from outside Turkey by several lines of taxes which do not apply to the state, state enterprises and domestic banks. 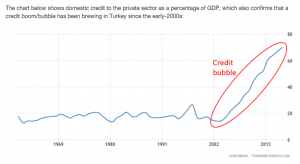 The result is that the exposure on Turkish private borrowers is concentrated on the domestic Turkish banks, with loans from them in both lira and foreign currency. The Turkish credit bubble that has built up over the last decade is the asset side the of domestic banks’ balance sheets, with a considerable portion denominated in foreign currency.

Domestic banks on-lend the foreign currency they borrow from abroad, to borrowers who have few or no foreign assets or revenues to provide a foreign exchange hedge.

This is where the disaster of the 40% drop in the lira’s value will play out. The lira has dropped from being worth $25c to $15c in the last year: private borrowers’ foreign currency loans are now worth 40% more in terms of the assets and revenues they have, raising the likelihood of a default.

If borrowers cannot afford the higher payments on their foreign currency loans, they default in lira as well. That puts the domestic banks absolutely at the sharp end of this crisis.

Here is a simple example, of a borrower with USD loans of $10 million costing 3% per annum all-in, and TKL loans of TKL100 million, but costing 10.5% per annum all-in. We take it that each loan is paid back in 10 equal annual instalments but that the interest is payable semi-annually, with the FX rate moving from US$1 = TKL4 to US$1 = TKL6.5: 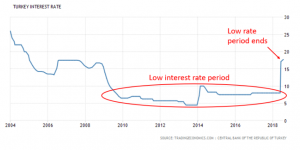 The temptation to borrow in a Low Interest Rate Currency and cash in a 7.5% or greater annual saving on Interest Paid will have been too hard for most to resist.

The so-called “Low interest rate period” for the Turkish lira would still have permitted a current saving in Interest Paid of 5-6%; now it has gone up theoretically to over 10% but this will be of no comfort at all. Domestic banks will be urgently turning off the taps and closing the stable door well after the horse has bolted.

A meaningful proportion of borrowers with low or no foreign currency assets or revenues will be unable to afford the debt service on their foreign currency loans, and they will default both on these and on their lira loans. The loans will go onto NPL status at the Turkish banks, and a big hole is left in their balance sheets and capital ratios.

In turn this puts into question the ability of the same banks to meet their own debt service on their syndicated loans and Emerging Market bonds.

For five Western banks there is the question of the value of their shareholdings in their Turkish affiliates and subsidiaries as well. The value will be impaired at two levels.

Firstly because the Turkish lira-based capital which the Western bank owns is diminished in the books of the Turkish entities themselves when their NPLs increase.

Secondly the value of the residual capital diminishes when expressed back into the currency of the parent.

BBVA owns just under half of Garanti Bank, the 3rd largest bank.

Unicredit has been quoted as second, and that will be because of its 41% stake in Yapi, the 5th largest bank in Turkey, with the other foreign banks owning part or all of Turkish banks being BNP (of the 9th largest), HSBC (of the 11th), and ING (of the 12th).

HSBC and ING both own banks in which their name appears, while BNP owns Türk Ekonomi Bankası, the “9th bank by size, and 6th among the privately-owned banks in Turkey”.

So there goes another of the “CIVETS” emerging markets. After piling in to the “BRIC” countries and seeing those markets overheat, become overbanked and so on, the yield-chasers decided that “CIVETS” were the next big thing.

Four down, Colombia and Indonesia to go.