Unicredit’s 2017 Group results presentation shows that group Non-Performing Loans (“NPLs”) stand at €48.5 billion nominal, up from the €36.9 billion nominal as at the end of 2016, when the bank had taken €8 billion of supposedly “one-off” provisions as a charge to its Profit&Loss Account to bring the Carrying Value of NPLs down to their recoverable value.

But in fairness it is quite difficult to work out what the NPLs are, since the bank is now projecting NPLs separately for their “Core” and “Non-Core” businesses, and is concentrating on showing NPLs at the Group level – including NPLs in the Austrian, German and Central&Eastern European banks – having previously laid them out for Unicredit SpA alone. 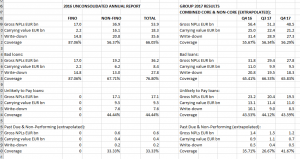 There is a general – and in our view misplaced – sense of optimism in the air as a mixture of this type of obfuscation together with IFRS9 accounting changes constitute a broad brush with which to push NPL levels under the carpet.

IFSR9 – which was meant to compel more accurate valuation of NPLs based on recoverability – is instead enabling Italian banks to take loan write-offs direct against their CET1 Capital over several years and not through the Profit&Loss Account now, thus disguising the total extent of the losses by smoothing them over a number of years, causing the Balance Sheet to be over-valued in the meanwhile, and enabling the Profit&Loss Account to be presented without the NPL losses appearing in it.

Moodys, on 28th February 2018, issued a bizarre circular to say how good it was that this accounting change enables Italian banks to deal with their NPLs more quickly, even though IFRS9 does not result in the bank getting more money back from the borrower.

Unicredit was one of the banks quoted by Moodys as benefitting the most from IFRS9, a fact which, if true, would support the contention that the bank is mastering its NPL problem. In Unicredit’s case a key supposed step was the Italian bank – the group parent and the issuer of the quoted shares – taking €8 billion of write-downs under the so-called FINO and PORTO projects in Q4 2016, claiming these were one-off provisions to bring the Carrying Value in line with the Recoverable Value, Carrying Value being their valuation on the bank’s balance sheet.

€3.5 billion was applied to reduce the Carrying Value of a portfolio of €17 billion nominal of loans down to €2.2 billion or 13% of nominal. This was the FINO portfolio which was moved off-balance sheet by the end of 2016 and which is now being securitised, although the bank has had trouble getting investors to value the book at 13% and has only moved €5.3 billion nominal at that level so far. Even then, there are reports that Unicredit had to subsidise the deal through fee payments.

€4.5 billion was applied to reduce the Carrying Value of other loans – ones still on Unicredit’s balance sheet – down to their supposed Recoverable Value. This was the PORTO project and resulted, at the end of 2016, in the Italian bank owning NPLs of €36.9 billion nominal, booked at a Carrying Value of €16.1 billion, or 44%.

44% of nominal was and is meant to be the Recoverable Value of on-balance sheet NPLs, and across all three categories of NPL: “Bad Exposures”, “Unlikely To Pay” and “Past Due & Non-Performing”. It is clear that the FINO portfolio was taken exclusively from “Bad Exposures”, but PORTO was not announced as applying only to one of the three categories.

Unicredit lauched a rights issue in Q1 2017 headlining with these figures and these prognoses: PORTO and FINO were held out as “one-off” operations to clean up the balance sheet.

Since then the bank has begun to report NPLs separately as Core and Non-Core, leading analysts’ attention on to how well the Core businesses are supposedly doing. Non-Core as a phrase implies Lines of Business that the bank has decided no longer to pursue but which are viable and should be attractive to other banks or investors. These businesses would normally have recognisable activity names like “Asian wealth management” or “Car leasing in Hungary”.

What is also concerning, when the Core and Non-Core NPLs are added together, is their size.

After the PORTO and FINO writedowns, and the backing-out of the FINO portfolio, the Carrying Value of Unicredit SpA’s NPLs had fallen to €16.1 billion on a nominal value of €36.9 billion:

But now the NPL book for the Group has risen again to a Carrying Value of €21.2 billion on a nominal value of €48.5 billion:

The average Coverage is now only 56% compared to 66% after FINO and PORTO, meaning the bank must recover 44% of nominal in order to avoid extra writedowns and not 34%.

Worst of all the “Bad Exposures” are only covered to 66% – all of the FINO portfolio came out of “Bad Exposures” and the bank has had difficulties proving to investors that the FINO book was worth 13% of nominal. The NPL book now looks as poorly provisioned as it was before PORTO and FINO.

Unicredit’s capital adequacy looks as poor as it was then, especially in Italy, and super-especially if the NPLs are still predominantly on the books in Italy and not in the foreign banking subsidiaries.

Unicredit’s consolidated equity, calculated by aggregating lines 130 to 200 in its consolidated 2016 accounts, was €43.3 billion at the start of 2017 and its Group results presentation states 2017 Adjusted Net Profit as €3.8 billion: group equity can now be estimated at €47.1 billion.

The equity available inside Unicredit SpA to support its own assets in Italy was negative: (€10.3 billion). The Equity Investments in its subsidiaries of €42.9 billion was almost exactly the same as the consolidated group equity on the same date:  €43.3 billion.

Thus the group’s equity is being fully utilised within Unicredit’s subsidiaries outside Italy, to support their assets and other business, and Italy has no equity at all: in fact it has an equity deficit of €10.3 billion.

Even this deficit of equity is over-optimistic because of the continued, inflated Carrying Values assigned to NPLs.

“Bad Exposures” should be carried at best at 13% and not 44%, because the FINO project has set a market-based benchmark (assuming, of course, that the FINO sales actually achieved 13% net, after deducitng any fees paid out).

“Unlikely To Pay” should be carried at 40% instead of 56%: carrying them at over 50% infers they are likely to pay, and that is an oxymoron.

These adjustments would necessitate further “one-off provisions” of:

If the investments in subsidiaries of Unicredit SpA have remained at €42.9 billion and it is still holding all these NPLs, its own 2016 unconsolidated equity of €32.6 billion would be reduced to €20.9 billion and its capital deficit would increase to €22.0 billion. These figures would be slightly ameliorated if the 2017 Adjusted Net Profit of €3.8 billion was substantially earned by Unicredit SpA, but it is not clear from the 2017 Group results presentation how much of the group’s adjusted net profit was earned in Italy and how much outside. We will have to wait for the 2017 annual reports for that clarification.

So this bank is nowhere near recovered, certainly not the Italian bank, despite the upbeat publicity machine broadcasting that the worst is behind them. Conservative provisioning would have the bank back to where it was in September 2016, in its worst situation to date.

And then three very serious questions are outstanding which do not appear to have been posed: