In a shock announcement BACS and Faster Payments are being run, as of today, by a company controlled by a single private individual. This must be a first for a critical UK national infrastructure.

New Payment System Operator issued a press release to this effect this morning. 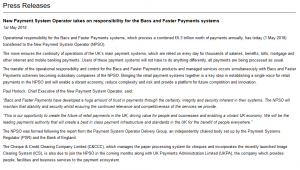 “Operational responsibility for the Bacs and Faster Payments systems, which process a combined £6.3 trillion worth of payments annually, has today (1 May 2018) transferred to the New Payment System Operator (NPSO)”.

“The move ensures the continuity of operations of the UK’s main payment systems, which are relied on every day for thousands of salaries, benefits, bills, mortgage and other internet and mobile banking payments”.

“Users of these payment systems will not have to do anything differently, all payments are being processed as usual”. 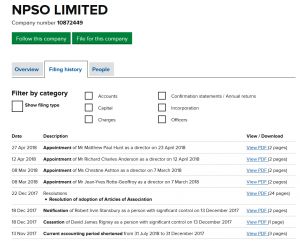 This is all very nice and comforting until one consults the Companies House records on 10872449 NPSO Limited, only to find that, as of the same moment, this company-limited-by-guarantee was listed as having just one single member-guarantor, an individual by the name of Robert Stansbury from Oxshott.

This individual has been the “person with significant control” since 13th December 2017.

So, as of now, these two payment systems processing £6.3 trillion per annum are in private hands.

We are more used to national infrastructures, like railways or gas companies, being privatised under a model where, at least initially, there is a broad spectrum of shareholders, and the shares are listed on a regulated stock exchange.

John Glen, Economic Secretary to the Treasury, has given an assurance via my constituency MP in a letter of 23rd April that NPSO’s being controlled by one person is no more than a transitional arrangement.

The salient excerpt from that letter is reproduced here.

Where is the certainty, though?

Is there at least a contract in place with this Mr Stansbury, whoever he is, that he will sign over his sole ownership in due course and without more than minimal consideration?

It is surely outrageous and indefensible that these critical infrastructures should be conveyed into the ownership of a private individual even for one instant.