The English Patient – an exercise in financial gravity 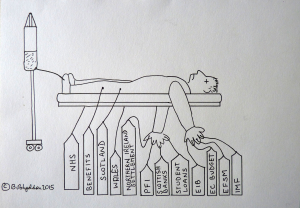 Having looked at the latest discussions on UK public spending and the European Investment Bank’s plan for their strategic investment fund, the situation looks ever more like my cartoon, with loads of money draining out of the patient and not so much going in.

The parties representing Irish, Welsh and Scottish nationalists are planning to gang up and force extra public spending on any minority Labour government, and direct that spending entirely to the unEnglish parts of the UK.

At the same time it is hard to conceive a resolution to the Greek situation that does not involve more money from the IMF, or from the European Investment Bank, or from the EIB’s new InvestEU fund. All of those entail a degree of commitment from the UK, usually not in cash but in extra guarantees for the debts of other countries. The most frightening one would be if some excuse were concocted to “mobilise the EU Balance of Payments Facility” to assist Greece.

This fund is earmarked for helping countries converge with the Euro and it has been argued in the past – unsuccessfully – that convergence need not stop at the point of joining the Euro. All wordings are flexible in a crisis.

The EFSM was agreed via Qualified Majority Voting thanks to the Lisbon Treaty: no UK veto.

The Balance of Payments Facility could be unlocked using the same mechanism. I hope not – I would have to re-do my cartoon and add another bottle.