This is my work over the last year on the financial case for Brexit: overwhelming and contained in the eight Brexit Papers. 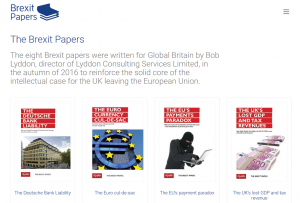 Freedom of Establishment comes together for the UK with the beneficial tax regimes of smaller EU member states, notably Ireland, Luxembourg and Netherlands, and with Freedom of Movement: low-value jobs are created in the UK but with full access to UK public services, imposing a financial deficit on the rest of the UK population.

And the second four…

The rising risk focuses on the Italian banking sector and the way in which toxic debts (i.e. Non-performing loans) are being exchanged by Italian banks for Floating Rate Notes, which can then be discounted at the European Central Bank: a diastrous exercise in alchemy.