TARGET2 imbalances – up and up

The ECB has now issued its figures for the TARGET2 imbalances as at 31st August 2017. 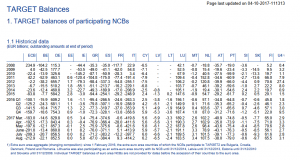 The figures are large enough, but they are already netted down once, from the original balances on the 552 current accounts that the TARGET2-participating central banks hold with one another in order to clear and settle cross-border payments.

Whilst these accounts may now sit on the TARGET2 single shared platform, the account structure is no different from the original TARGET, and was confirmed in the 30th December 2005 ECB Guideline for TARGET.

The difference is currently around €3 trillion, and can be attributed 100% to capital flight, but in two variations: 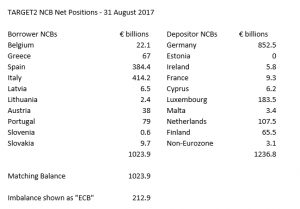 This is ongoing capital flight out of the Eurozone periphery and into the four main creditor nations in TARGET2: Germany, Luxembourg, Netherlands and Finland.

The net-net liability of the ECB is €212.9 billion, and the ECB’s shows this as a liability in its balance sheet.

This treatment is enabled by an assignment and netting agreement, even though the ECB is not party to the accounts on which the original balances sit. The ECB Guideline must be adhered to.

The documentation that transsubstantiates the original balances into the ECB’s accounting treatment either:

If the latter turns out to be the case, it overturns the efforts of the creditor member states’ governments to avoid socialising Eurozone public debt.

The ECB’s Asset Purchase Programmes sit behind the majority of the TARGET imbalances.

These operations are a perfect “round trip”: APP assets are purchased from an investor by one Eurosystem member and then used by it as collateral to raise the purchase amount from the Eurosystem member where the investor has the account into which it receives the proceeds of the asset sale.

The ECB issues a list of all bonds that are eligible as collateral for monetary and payment operations within the Eurosystem. There are 30,000 bonds on it and the ECB stipulates the “haircut” applicable to each bond. This is the security margin for the lender. If a bond is allocated a 2% haircut, the lender need not advance more than 98% of its value.

In order to be eligible for APP – a Eurosystem “monetary” operation – a bond must be on the ECB list, and then, being on the ECB list, it is also eligible for securing a Eurosystem “payment” operation – which TARGET2 is. A bond issued by the autonomous region of Andalucia would for sure be on the list, and so all Eurosystem members are obligated to lend against it, to the “haircut” amount, for either monetary or payment operations.