Delighted to have been included in the acknowledgments in this new book co-authored by Dr Gerard Lyons, chief economist for a series of leading banks, and Liam Halligan, columnist at the Sunday Telegraph. 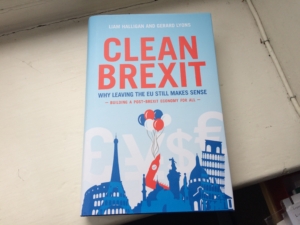 Specifically on p187-8 in the section “Tax and Spend”, they referenced my Brexit Papers 4 and 5 for Global Britain (http://brexitpapers.uk).

“According to fascinating research from Global Britain, MNCs have been taking advantage of, or legally abusing, the EU’s ‘freedom of establishment’. This is the corporate version of freedom of movement”.

The biggest culprits in this regard are Ireland, Luxembourg and, to a lesser extent, the Netherlands”.

“The UK Exchequer suffers… The sums involved are huge, with £10 billion lost annually”.

So far in the UK’s bargaining stance towards the EU, however, this issue has not even made the small print. Indeed, while it has been pretended that the Lancaster House speech and subsequent position-taking in the negotiations would guarantee that Brexit would deliver on 95% of what Brexiteers thought they were voting for, this seems now rather like a Christmas List with a hundred items on it, starting with…

And on Christmas Day you get:

The four items with the highest Brexit tariffs are:

Delivering on these high-tariff items and as from March 2019 should be the government’s priority, and if that means no tariff-free trade with the EU so be it. That is what Brexit means to the 17.4 million people who voted for it. So far the UK government’s position has been to give away (3) completely, pay (1) until the end of December 2020 (when the Multiannual Financial Framework expires), and not even to mention (2) and (4).