There are growing concerns about the safeguarding regime for client funds held by eMoney Institutions. eMoney is now being used as a bread-on-the-table payment mechanism, rather than for occasional remittances or for holiday money. Then both the amount being held and the duration it is held for increase, as well as a client’s dependency on the eMI.

Safeguarding is the method of ensuring that customers of eMIs can never lose their money, and is achieved by eMIs having accounts at banks in the EU which are named “[eMI name] Safeguarding Account”. There are other allowable methods of safeguarding, such as insurance or guarantees, but so far neither has materialised in practice, and the only method in usage is the eMI holding a bank account.

The stress in the legislation is on the account balance surviving the bankruptcy of the eMI.

To be genuinely safe, however, the account balance must survive the bankruptcy of both the eMI and of the institution where the account is held.

As a fallback to the solvency of the institution where the account is held, the balance should be covered by the respective financial services compensation scheme (“FSCS”) in the UK or other EU Member State. In practice many eMIs have their accounts in other Member States due to the de-risking undertaken by the UK banks.

There is a first question on the status of “client money accounts” held by an eMI i.e. held in the eMI’s style but with extra naming on the account. Is it certain that the balance will not count as an asset available to the trustee-in-bankruptcy of the eMI should it go down, and be available only to the eMI’s clients? Who will be representing the clients in that situation and attaching the balance on their behalf? Has that entity already been named and appointed, and provided with the requisite authorities?

This is the main issue for clients if the eMI itself goes down. But what about if the institution holding the balance goes down? Is there coverage under the respective FSCS, and what happens if either (i) there is no FSCS coverage and/or (ii) there is an excess above the amount covered by the FSCS?

For sure the clients involved, with money in the “client money account”, will not have been identified individually to the bank holding the account so they will not be covered by the FSCS individually. 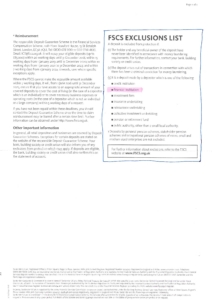 Absent a specific letter – and not a statement stuffer – from the bank running the account for the eMI involved, there can be no certainty that the balance in the account would be set up so as to be covered by the respective FSCS. Even then the cover is only up to EUR100,000 or equivalent.

It is possible, but needs to be confirmed, that the type of account, being a “client money account”, does not become part of the bankruptcy estate of that institution but is carved out from it and protected. In that case the institution would be acting like a trustee and there would be earmarked assets representing the eMI client money. Whose liability would that money be, then? It seems unlikely that this is the construction if the EU’s criterion is simply that the money be held in an EU credit institution i.e. that the money is a liability of such an institution, and that the creditors (the eMI’s clients) have to look to the general asset pool of the institution if it goes down.

The EU’s theory is that the safeguarding regime ensures that customers of eMIs can never lose their money, but in fact they could do so if the balances are just ordinary liabilities of the bank involved and are not in some way carved out from being part of that bank’s bankruptcy proceedings. An eMI’s operational account would for sure just rank as an ordinary liability. The issue here is the safeguarding account, which is likely to have a lot more money in it.

This could play out in one of two ways:

This is a concern for eMoney firms and their clients, as they may not be in a position to fully assess their risk if the deposit institution goes down and is resolved as per the EU Bank Recovery & Resolution Directive, still less if the EU’s bank supervisory mechanism handles the situation partially in line with the Directive, and partially not – as has recently occurred with Banco Popular Espanol.

The clarity that eMIs would need is confirmation of which of the following points are true:

Firms have received documentation about the respective scheme from their banks but in the UK example getting a statement stuffer about the FSCS is not proof in itself that one’s deposit balance is eligible: the UK exempts all Financial Institutions from cover.

Firms will naturally be reluctant to act aggressively towards the EU banks that are taking their deposits, or to make a concerted campaign on this issue. Nevertheless there is a lack of clarity and therefore an exposure, which could turn into a major blow-up in the eMI sector, since many are holding their client funds in Cyprus, Malta, Latvia and Lithuania. Payment Institutions – the other main type of non-bank Payment Service Providers – are less exposed because they hold their clients’ funds for a much shorter period.

eMIs, however, have started to position themselves as capable of replacing banks, holding client funds sine die, and acting as main financial partner to their clients, and in this scenario the risks in the current safeguarding regime are heightened, not least because the balance in the safeguarding account is liable to exceed EUR100,000 if clients are regarding and using the eMI in this way.